Another Lost and Found Story 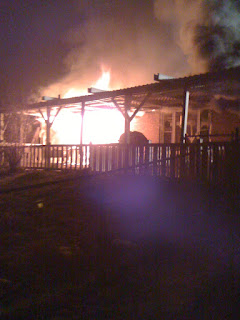 Back in February of 2010, Linda and I suffered a devastating house fire. Seems that the Romex wiring that they used in the late 50's was insulated with brown paper. As the paper aged, it dry rotted. We suspect a squirrel or some other critter got in the attic and gnawed on the outer cloth wire covering and shorted something out. In any case, I hope he got his just desserts.

At 2am, we were in our bedroom at the end of the house. I heard a crash in the family room in the center of the house and got up to investigate. Our two watchdogs were fast asleep. I looked down the hall and saw lights where there should have been none. A few flecks of flame were emerging from a built in cabinet. Fire, I thought. Ran and got a kitchen extinguisher. Sprayed it for 20 seconds till it ran out. Hmmm. I quickly ran to wake Linda and get her moving. We ran past the fire in our nightclothes.Fortunately, we live in our house and winter overcoats were draped on the kitchen chairs. Grabbed the dogs and out the door we went. Called the local fire volunteer fire department. Waited forever and called them again. We then moved the cars away from the house and watched the house burn. The fire department arrives after what seemed to be an interminably long wait. (Turns out after the initial call, I called 2 minutes later, and they responded in 4 minutes. For a volunteer force, that is amazingly quick response). I knew some of the guys who responded.

Later that morning, around 5am, we were still in the truck with the dogs and the firemen were knocking down  the hot spots. A knock at the window. An unknown neighbor had gone to the local bakery and come back with coffee and donuts and dog food and water in a little waterbowl. How's that for neighbors? People offered us clothing, shelter; it was very moving. The $5000 from AAA put us up in a nearby hotel for the weekend while we figured out what to do next.

Once we got in the house to survey the damage, it was mind boggling. What had taken 8 years to create (I had redone every single room in that place myself) was gone in 10 minutes. Snow fell into our family room from the gaping hole in the roof. I just about lost it. Cried like a baby. Everything in the center of the house was just structurally gone from the floor up. Turns out that little bitty flame I initially saw was just the burn through. The fire had run the attic. We had a lot less time than we thought we did. If we had been a little slower to wake or to respond to the fire...........

What wasn't burned outright got heat flashed so badly that the plastic face plates of computers turned into dripping goo. Everything from ceiling to about 2 feet from the floor got heat flashed. Everything, even that which was undamaged was smoked. That smell is a terrible pervasive thing that still lives in some of our restored stuff. In most cases replacement was the correct approach. A built in bookcase, containing my copy of Embers 1967 burned merrily that cold February morning along with most of my reference books and some of my favorite fiction.

Fortunately books can be replaced (annotations are lost forever) and my wonderful wife saw fit to buy me a Kindle for my birthday later that year, bless her heart. My firearms and the fireproof safe were intact. The computers, although melted, still had recoverable hard drives so we saved most of the data! Friends and neighbors helped us pull out everything that might be restored (a lot of which wasn't restorable on reflection)

But my carefully preserved Embers, now that was a problem. It had been in the same condition that I got it in 1967. Except a later girl friend had cut out my high school girl friend's photo (the beginning of the end of that relationship, I might add). And the problem gnawed at me, but only in the back of my consciousness since I had much bigger problems to confront. Getting a house rebuilt, moving into a rent property we just acquired (never thinking we would be living there), replacing everything (there is so much stuff you don't even think about any more but it's there), you know those kinds of little problems. (By the way, if you're ever in the market for homeowners insurance, think about AAA Motorclub insurance. Yes they do homes too. Underwritten by Cincinnati Insurance. Wonderful folks. We're 3 hours from St Louis. We called them 8am the morning after the fire. They were there in 3.5 hours with a recovery check for $5000 to hold us over.)

But back to Embers.......Always one to tackle a problem head on, I called Wayne Valley after we had moved back into a brand new house of our own design and specifications, and explained to them what had happened. The school secretary said that she would see what she could do.

I waited.  A few days later, Lisa Courter emailed me "I have a box marked 1967 in the storage area under the school. Let me check for a copy of the yearbook."


I waited. A few days later, Lisa called me to say that after brushing the spiders and cobwebs off that box, she found two copies of Embers. One was severely damaged, missing sections; the other was complete, but the binding was a little beat up. I said I'll take it, trying to remember where that storage area might be? Wasn't the school built on a slab?


I waited. A week later, a package arrived in the mail, delivered to the door by our mail carrier. I once again have a copy of Embers. Complete. It had belonged to some one. There was a photo missing. I couldn't tell who was the offending party since the photos lined up on front and back of the page, but whose ever book it used to be, they didn't like that person; the only writing on it was a wise crack from John Gross. Other than that, perfect; and yeah the binding was beat up more than a little but it holds together and is an invaluable reference in my quest to find everyone.


When you lose most everything, what will you value most? When a big hunk of your past is destroyed, what will you try to replace? I think that's why I'm doing this. It's also why I am compelled to go to the 45th. Will I see you there?
Posted by Milton at 6:55 AM