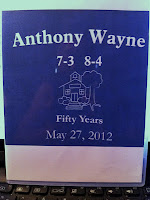 Amid the whirlwind of activity surrounding the Reitz Class of 1967 45th Reunion preparations, including preparing or coordinating the name tags, banners, decorations, entertainment, food, printed programs and the reunion program, the Friday night football game and pregame get together at a local restaurant, the Saturday morning school tour, the golf outing and the reunion itself, (I guess we're saying we've been a little busy), I took a trip to the mail box and found a manila envelope in the mail from Cathyann Court in Wayne. Like a kid sneaking a gift out from under the tree the day before Xmas, I tore open the envelope and found the DVD that the Piagets had promised.

Yes, it was the video record of the 50th reunion of the Anthony Wayne 7-3/8-4 classes which took place in Wayne the day before the Wayne Valley celebration. Throwing it into the DVD drive of my laptop, there it was, a professionally prepared record of our truly joyous reunion. Included for good measure was the Anthony Wayne Junior High School Talent Club Program for "Comedy Tonight" with many familiar names represented, not just folks from our class, but all school. A copy of this program will be posted on the www.waynevalley67.net website in the very near future.

It only took a moment before I was transported back to that day when a group of young teenagers wearing less than young flesh reunited with my two most beloved teachers.  I also winced at my inability to express my gratitude to these two people for shaking me by the shoulders and waking my humanity, my individuality, my first faltering steps toward adulthood. Unexplainably, I also had difficulty as well in recounting my fifty years of adventure (and more than a little misadventure) through multiple careers, families and through it all, I always believed that those years in Anthony Wayne were the spark, the beginning of the beginning. It was frustrating for someone who has made his way in the world largely on his ability to speak extemporaneously. At least I wasn't alone. It's all there on the DVD for the record as each of us tried to thank these two teachers in our own way for the gift that they instilled in each of us.

Sometime next year, we're going to do this again. Maybe I'll figure out how to express my gratitude to these two remarkable people by then.
Posted by Milton at 5:39 PM