It's been a really busy summer. Between travel (Glacier National Park) and a short trip to Arkansas (a delightful surprise), normal honey-do's (or don'ts), my niece's wedding in DC and my step daughters new house (this event means providing a lot of help), there haven't been too many moments to catch my breath.

But I've been able to lurk on FB and see that everyone seems to be in the same boat. Travel and family. That's what retirement is supposed to be about, eh? 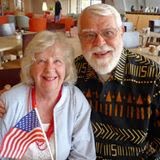 Speaking of grand summertime adventures, (sorry Schuyler Colfax kids), those of you lucky enough to have had Dorothy Tunis and Al Piaget (now the Piagets) for 7th or 8th grade block should now that they celebrated their 50th wedding anniversary yesterday. A few weeks ago, I got a call from Darth explaining that since none of us could make the event, would I care to write some words to be read at the celebration on behalf of 7-3/8-4. Never short on words, I agreed immediately, and want to share it with you hoping that you all feel the same way:


In 1961, a Chinese American 7th grade student walked into Anthony Wayne Junior High School with what he smugly believed was a solid academic foundation. He believed that his world view was complete and that he understood the world that he would have to face. He was so wrong. Over the next two years he learned he had been deliberately blindered and was not at all prepared for our tumultuous future.

51 years later, that same student now understands that the world is full of wonder waiting to be discovered; full of joys and sorrows to be experienced, without limits. I probably would have come to this conclusion eventually, but it would have taken infinitely longer for that smug 7th grader had he not experienced the educational epiphany that is Darth Tunis and Al Piaget. And I say the same student because I also learned from them that life is an ongoing continuous educational experience.

I am only one of thousands of lucky ones who had the good fortune to cross paths with the Piagets as part of their schooling. I know 25 or so who thought so much of Darth and Doc that they came together after 47 years from every corner of the country to celebrate with their favorite teachers. The Piagets were OUR teachers, because they care about us and we care about them. I have always known that they cared about each other and that has always made me happiest of all. I couldn’t be more pleased to help celebrate their grand anniversary in this humble fashion. I could go on and on but it would only serve to further embarrass these two wonderful people since they never thought it was all about them; to the Piagets, it was always about us.

To my mentors and friends, may the way always be clear for the journeys to come…….

If you share my sentiments, please feel free to go to the Piagets FB pages to send felicitations. That's Alfred Piaget or Dorothy Piaget on FB.

On far sadder matters, I note the passing of Tom Smith, Tim Henneman and Ed Sorock.